Not the most technical of terms, I know. As my first draft starts to move more swiftly and I work out just what I need to write in order to get there, I've been thinking about the different ways people write their first drafts. Some just write and write and end up with many more thousands of words than they need; their second draft, as well as reshaping and rethinking, is a process of trimming and cutting to find the essence and minimise the waffle. Others, and this is the way I seem to work, use the first draft to sketch scenes quickly and end up going back and filling them out and adding more scenes to expand the novel.

For example, in the second draft of The Sound of Butterflies, I remember going over each scene and slowing it right down. Closing my eyes and imagining myself into the head of whoever had the point of view. What were they thinking about? How were they feeling about what they were thinking about? Where were they physically in the space they inhabited? What could they see from their vantage-point? What did the air feel like on their skin?
Of course I don't necessarily put all these details into the scene when I'm re-writing it, but it helps me find what is important to the story and to the characters' states of mind. It fully immerses me in the character's point of view and enables me to write a more authentic scene. The result is often a more sensual experience for the reader I think, and helps create empathy for the characters.
The first half of my first draft tends to move quite slowly as I explore the characters and their voices (and doing research, but that's another post topic altogether), getting to know them to the point that I can race with more confidence through the second half to get the story down, knowing that I'll be coming back to flesh things out at the end when I know more about where things will end up.
The second draft isn't just about expanding scenes. It's also about a structural overhaul, looking at the pacing, adding a scene here and there to develop a theme or an aspect of the story that seems rushed or contrived or just wrong somehow. At this rate my first draft will probably only be about 60,000 long, but ultimately I know that the book will need to be about 75,000 to tell the full story that I need to tell.
How do you work? I'd be curious to hear from a taker-outer.
Posted by Rachael King at 10:51 am 17 comments:

Piemme will be releasing The Sound of Butterflies in Italian very soon. It translates as The Music of Butterflies, which is quite lovely, I think. It is now also available in Greek as Ο ψίθυρος της πεταλούδας.

But enough about me. I'm sad to say that I have not seen Matilda the chicken at the bus stop since that fateful day. I'm hoping she has just found a new home rather than met an untimely end.

I am packing and moving house over the next week, so blogging may be sparse. Have a lovely weekend!
Posted by Rachael King at 2:17 pm 18 comments:

Hi, my name is Morgan Hayton I am 16 years old. I have spent my winter school holidays for two years in Fiji volunteering at local school as part of my schools mission team. We visited a very remote school that is struggling and has only handful books in the whole school, the teachers there can only dream of starting a library. Have you ever wanted to change the world? But think it is impossible because we are just one person? Me too. But then I came up with this idea. We are going to build a library together, one person, one book at a time. One person can't build a library but if everyone that gets into this group gets a book from their bookshelf (they don't have to be new) and posts it to Fiji we can do it together. We can build a library together.

Please write your a small bit about yourself or family inside the cover the kids would love to know who you are and where to book came from.Look at my page from time to time and I will get some photos next year and you can see your library.

Roger Morris brought this project to my attention and I am sending a signed copy of The Sound of Butterflies along with a stack of children's books. It doesn't have to be a stack - just one will do. I think it's a really lovely idea, and I am fully in support of the redistribution and the sharing of words.

If you're on Facebook, you can join Morgans' group here.

On another note, I have been given this 'inspiration award' by Aspiring Writer. 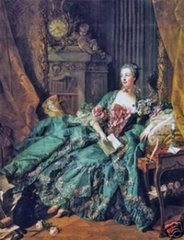 Thanks Joanne! I'm supposed to pass it on to seven other bloggers but to be honest, Joanne has simultaneously given it to five of my blogger friends, so I'm just going to pass it on to my friend Marianne. It is appropriate in this post about donating books to under-privileged children as Marianne has long been an inspiration to try and make the world a better place. She is tireless in her humanitarian work, the most deserving person to give an inspiration award to.
Posted by Rachael King at 3:43 pm 6 comments:

Today is not 37 degrees. Hooray! Yesterday was so hot that I confess I retreated inside, closed all the curtains, doors and windows, set the heat pump to its cooling function and lay around groaning. Tomorrow will have a high of 17 degrees. It seems that in Christchurch there is no middle ground.

The bus stop where I catch the Metrostar to work has lately been home to a little chicken. I call her Matilda. She usually just hangs out under the seat, but sometimes she can be seen scratching in the gutter. She is very sweet.

Today there was a pile of chicken bones at the bus stop. Granted, it was rubbish-collection morning and a dog or cat could have just got into someone's rubbish to drag out the remains of a roast. Or perhaps Matilda has met her end. She wasn't at the bus stop this morning, but maybe she took the chicken bones for a Blair-Witchesque warning and has stayed away. Poor Matilda. I hope they weren't her bones.

Because I missed my bus, I sat outside my local favourite cafe (for once it was cooler outside than in) and had a coffee and did some writing in my trusty moleskin. I got chatting to a guy at the next table, and at the end the conversation went like this.

Him: "I thought I might write a book one day. It's an easy way to make millions."

Me (with hint of sarcasm): "Yes, it's really easy to write a book."

Me: "And it's quite hard to make a living out of writing books, let alone make millions."

Him, with a look of incredulity: "But what about all those people who get rich off it?"

Me: "You mean, those two, JK Rowling and Dan Brown?"

Him (with a look that says they were exactly the writers he had in mind): "So if you can't get rich, why do you do it?"

Me: "Because I love it. I can't do anything else."

But what about the writers?

I am an optimistic sort of a person. Apart from the odd moment of irrational fretting, I tend to think that everything will turn out in the end. So with everyone banging on about the state of the economy and the looming Great Depression #2, I have either decided it won't be that bad, or buried my head in the sand, whichever way you look at it.

Today I just had a pause for thought. With Bookman Beattie re-posting a Telegraph story about the closing of the famous Murder One bookshop in Charing Cross Road, and indeed Charing Cross Road's status as a beacon for booklovers being threateneed, and with that story coming after lots of other stories about stores going under, publishers (local and overseas) making massive cutbacks on staff and parties etc etc... I just thought: but what about the writers? Where does that leave us?

Because I don't think I've read anything about that. Does this mean that the books we are slaving over will get turned down by publishers? Will publishers stop publishing all but one or two block-busters per year? I heard Laura Kroetsch saying on Radio NZ National the other day that literary fiction will be the big loser on the day, but again, she was talking about the sales of the books themselves, rather than the authors of those books and where that leaves them in terms of whether their books get published at all.

This leads me on to all kinds of ghastly questions I might ask but suddenly I feel the urge for a nice sand-bath.

Thoughts anyone?
Posted by Rachael King at 6:39 pm 11 comments: