My posting has been tardy. My writing days are down to two per week and in the evenings, after either looking after a two year-old or trying to write my novel on queue, I am just too darn tired to think, let alone come up with some erudite topic for blogging.
The writing is going well when it happens. This is my last week with an office at the university - after that I will have to put blinkers on to ignore the shambolic mess that is my house so I don't spend all my writing time doing housework. Lectures started again this week and after dropping my son off at creche this morning I couldn't find a carpark (I used to catch the bus), so I drove home again and have been trying to work in the chaos.
I am hoping that I will be back to my old blogging self one of these days. For now - please bear with me as I adjust to my new routine.
Wait - there is one thing. The lovely Vanda Symon will be in Christchurch on Monday for the Words on Wheels tour on Monday, so I will finally be doing something booky to report back on. Oh, and on Thursday I will be speaking to a class at the Hagley Writers' Institute, where I will be a supervisor this year. I plan to read something from my new work in progress as, to be honest, I am sick of reading from that book about butterflies.
There. I did find some things to post about after all. Just a place-holder post, really. An I'll-be-back sort of a post.
Posted by Rachael King at 6:45 pm 9 comments:

Progress. And the importance of different types of readers.

Despite my diminished working time, I feel that I have made some significant progress in the last week or so. You might say that I have broken the back of the novel, although given the mood swings that go with writing a novel, it could have knitted its own spine back together by next week for all I know.

At this point I can see the end, and know just what I need to do in order to get to the end of the first draft. It's just a matter of systematically working through each section that needs to be added (in contrast to the last one, I have not worked from beginning to end, I have jumped around a lot). It's been slow. I have installed a picometer to the right (you may have noticed it creeping slowly upwards), but I have written many more than 42,000 words over the past year - 42,000 is just the number of words that have stuck. And I do tend to revise somewhat as I go, so I don't race through a complete draft and turn around at the end, breathless, to see what I've got. I know what I've got. Now. I say 'now' because a few weeks ago I definitely lacked clarity; clarity which I now have gained. I think. (Hark at her, how certain she sounds!)

I decided it was time to send some out to a trusted reader. Most of my readers are other writers. I will be having a long overdue meeting with my writing group when I go to Wellington in March (I say long overdue, but I have not been ready up until now). But in the meantime, I needed another type of reader. Not a writer-reader, but a reader-reader. So I sent it off to my friend Mary (not Mary McCallum fyi). What is great about Mary is that she is a very careful and intelligent reader. She will not only get excited for me if she is enjoying it, she will tell me exactly what works and why. She is the perfect person to send my first four chapters to because she will ask a lot of questions about what is going on, and then tell me whether or not I am answering them sufficiently.

I got a wonderful email back from her, saying all the things I needed to hear right now to give me the boost to keep on going. And I don't mean just unconditional praise such as you might get from your mum or husband, but useful positive criticism. From a very clever reader's perspective. She added, at the end, somewhat apologetically, that the new novel is more sophisticated and complex than The Sound of Butterflies ("not that there's anything wrong with The Sound of Butterflies," she said). And I wrote back and told her that in fact that was the highest praise she could give me, because any novelist's fear for their second book is that people will say "well it was OK, but it wasn't as good as her first one".

I'm looking forward to my writer-readers' feedback too, which will no doubt be more critical, but for now, Mary has given me the energy to keep going. You could say that she is that elusive 'perfect reader' I have in mind when I write my books. Now that she's given it the seal of approval, I can continue with confidence. Because sometimes a writer can't see the bloody wood for trees, and some outside help is what is needed. Thanks Mary.
Posted by Rachael King at 7:39 pm 12 comments:

A room of one's own no more. 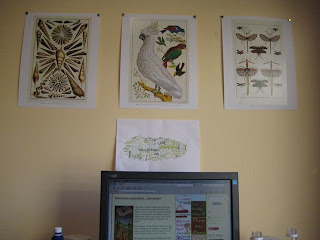 At least, not for much longer. My residency finishes at the end of the month and after that I'm on my own - like most writers. How spoiled I have been! I got a bit of a tatse of my new life yesterday when I was at home with my son. I planned to do some power writing during his usual nap-time (usually about 1 1/2 hours). I put him down, sat at my desk, and after 5 minutes he was yelling to get up. So, no nap for him, and no writing for me. I dread to think that the excitement of having mum home has excised the need for a daily nap. Thank goodness for the times he'll be at creche (which he loves by the way).
I have been extremely grateful for the Ursula Bethell residency this year. It is such a fantastic opportunity: a salary and a quiet, roomy office, which equals time and space to devote energy to writing a novel. The English department at Canterbury is the perfect environment for a writer – it is friendly and very quiet and I have been left alone to get my work done.

I have made good progress on my new novel, tentatively entitled The Collectors, with a huge amount of research and a first draft almost completed. When I began the year I had a vague premise, an idea of where I thought it would be going and 10,000 words. Over the last 11 months my novel has changed into something far more intricate and ambitious and interesting than I originally envisaged. The residency has given me (or, has let me give myself) permission to explore ideas to the full rather than doggedly sticking to a plan and churning out something less satisfying, which is often the case when writing time is limited.
I was able to attend lectures on the 19th century novel, which fuelled the story and gave me ideas on intertexuality to create a many-layered narrative. These lectures were a highlight for me, not just for their usefulness but for the sheer enjoyment of rediscovering and analysing books I had read in the past.

Another one of the highlights of the residency has been the access to the university library, which has allowed me to use material that might not otherwise have been readily available to me. I will miss that resource when I leave.

During my time here I have also taught a night class at UC Opportunity (continuing education) and addressed two creative writing classes, and have been available for students to come and talk to me. I have been helping one student in her search to find an agent and a publisher. I also took part in a poetry reading at the University Bookshop on World Poetry Day in July. Spending the year in Christchurch (I normally live in Wellington) has meant other opportunities that I wouldn’t otherwise have had – helping out at the Christchurch Writers’ Festival and addressing a class at the Hagley Institute for example. I have been very warmly welcomed by the Christchurch writing community.

I will be very sad to leave when my time is up, and I highly recommend the residency to other writers. It is so important that residencies such as this exist as it is very difficult for New Zealand writers to make a living from their writing alone, and these opportunities ensure that good New Zealand books continue to be produced.
Posted by Rachael King at 1:06 pm 13 comments: