That was when it happened. My hand rested on the glass and the window began to hum. I felt it pass through my fingertips, up my arm and down to my toes. The rest of the room began to gently rock, as if the house were a giant that I had disturbed from its sleep; it shrugged its body from side to side and my heart pumped so hard I could feel blood pulsing in my face. It was the sound that disturbed me the most, as it travelled across the plains towards me, was all around me for a second, then travelled on through, a low throbbing.

“Letting off steam,” I reminded myself and lay back down on the bed. Even though I knew it was an earthquake, I couldn’t get rid of the feeling that the house had caused it somehow.

No, this isn't one of my diary entries from the last few weeks but an excerpt from Magpie Hall. Rosemary is dogged by earthquakes, a (rather obvious perhaps) metaphor for her own sense of instability.
Then Dora, the wife of Rosemary's great-great-grandfather Henry, experiences firsthand the Canterbury earthquake of 1888:

Dora is startled awake by her bed shuddering across the room. In the fog of sleep she thinks she is back on board the ship that she and her father took from England last year, but within moments she knows this is not so. The earth, which had been shrugging and sighing the evening before, has finally given in to its anger and heaves the house from side to side. Its wooden structure creaks and groans; her washbasin falls from its stand and smashes. She curls into a ball and clutches her knees until it subsides.

The house she lives in survives the quake, but part of the house that is to become Magpie Hall falls on its owner, killing him, thereby freeing it up for Henry Summers to buy and repair it. I couldn't help think of Magpie Hall as I looked at pictures of the beautiful Homebush Station, brought to its knees. Magpie Hall would not have survived. 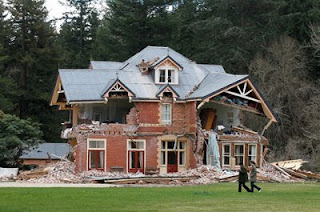 It's now October 28th, and I have been unable to bring myself to finish this post. Lack of time certainly, but also the enormity of writing about the experience. Here's what I wrote a few days after the quake: "It's taken a few days for my nerves to calm down enough to sit still and write some thoughts about the Christchurch earthquake that hit us at 4.35 am on Saturday. I am still in shock to be honest. We came out of it unharmed, with moderate damage to the house, but going through a 7.1 earthquake messes with you. It's hard to explain, but physically and mentally I have been feeling the way I felt in the days after my father and step-mother were killed in a car accident, and I put it down to the physiological effect of unexpected trauma. Long term, who knows? I will probably recover more quickly from this as there isn't grief on top of shock."
Well, I have recovered. I left town for a week with with my kids to calm my nerves, and it helped enormously. Now that the promised 6 point something aftershock is a distant possibility, I ride them with more excitement than terror. Last week, I was at the gym when the big 5.0 aftershock hit, and the plate glass windows flexed while the rest of the building jiggled around as though it was made of cardboard. The noise was nearly drowned out by women screaming but I felt oddly calm. I called my son's creche to be told they had all been sitting down to lunch and had dived under the table. There were no tears, thanks to the calming influence of his teachers. When I picked him up and asked him what had happened that day, he told me he'd had yoghurt for lunch. When I said "what else?" he said "oh, there was an earthquake." I am proud and thankful that my kids are not living in fear.
Elsewhere in Christchurch, people aren't so lucky. The houses in my neighbourhood have mostly just lost chimneys, but one of the things I mourn in all of this is the loss of the character shops, not just in St Albans, but all over Christchurch. You know, the little brick shops that in the old days would have been the butcher, the fish shop, the green grocer. Now, the shops that are gone are the dairy, the hairdresser, the shoe shop, the Thai restaurant. Around one corner from us is the the cafe I used to stop in on my way to the bus when I was writer in residence at Canterbury; next to that, the tattoo shop, Ink Grave, where I did my research for Magpie Hall. After the quake they looked like this: 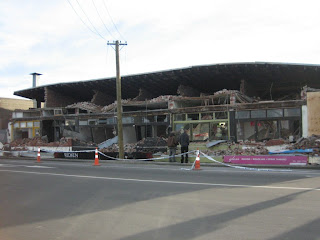 Now they are gone. Thank god it didn't happen when all those lovely folk were at work. How could they have survived? This is the scene all over Christchurch, shops that for some reason seem to mostly be local fish and chip shops and Chinese takeaways, probably because the rent was cheap. I shudder to think what will be put up in their place.
Plenty of people have written about the earthquake, so I'm going to finish up and finally post this. It will make way for my blog to open up now that I'm writing again. I can stop thinking about it and turn my mind to book and writing related things. But first, I just want to mention the people who still can't flush their toilets, who still have to wash their dishes in a bucket because there is no wastewater, and those who can't return to their homes at all. I actually cried the other day when I walked past a beautiful two-storey brick villa in my neighbourhood. When I first saw it months ago, I thought, what lucky people, to live in such a beautiful house. That house now has yellow tape around it; one upstairs wall has fallen off, the others are cracked beyond repair.
I also want to mention the people whose businesses have suffered, either because their buildings are unsafe, or because their shops are right next to those that are being demolished. Because it must seem to all those people that to the rest of the country, and the rest of Christchurch, life goes on, while their's are still hanging in limbo. And I want them to know that I am thinking of them and hoping that things will get better soon.
Posted by Rachael King at 2:36 am 10 comments: