A book tour and some very big weather.

I started writing this on Friday, and it is in danger of becoming out of date before I can finish it, so I'm posting it now... will be back soon to add to it.

I am sitting in my brother's kitchen in Wellington on a borrowed computer, waiting for my flight to Christchurch and hoping it hasn't been delayed. I was due to fly out last night at 7.45pm. I had been worried for days that the forecasted snow in Christchurch was going to keep me out; in the end it was Wellington's Big Storm that kept me in.

And what a storm it was. Pictures emerging this morning were gobsmacking -- of the road torn up along the South Coast, of Island Bay's seawall in tattered chunks. I thought of the children I visited on Wednesday as part of the NZ Post Children's Book Festival week, and hoped that they weren't too scared and managed to stay safe and dry, that their homes weren't damaged.

Horrible weather aside, I had a wonderful couple of days visiting schools to talk about Red Rocks. I was particularly excited to be going to Island Bay and Owhiro Bay schools, as Red Rocks is set in their neighbourhood. When I talked about my initial idea, about a strange woman walking around the streets looking in people's houses, searching for something (her skin, perhaps), I suggested to the children that perhaps it was their houses she might have been looking into. All the kids were familiar with seals and had been to Red Rocks, and many of the children live on Owhiro Bay Parade, where Jake's dad lives. Lots of them had an idea of which house it might be, but of course the house itself came out of my imagination, based loosely on one I had spotted, which had a sleepout on the hill above it (as a few of them do), a perfect writing shed.

At Roseneath school I talked about how I had taken some of my father's words, which I talked about here, and put them into Red Rocks. The teacher pointed to the wall behind me, where the exact quote from the Wellington Writers' Walk was pinned. The kids had studied the Writers' Walk, knew the quote well, and had spotted it in the book. I was most impressed. They presented me with a lovely handmade card when I left, which I'll add to my gallery of Cool Stuff Kids Have Made Me and post soon.

I have a big thank you for John McIntyre from The Children's Bookshop, who drove me around for the day and minded me, and who also managed to sell a few books along the way.

After Wellington, I was on the train to Masterton, where I was taken out for a very nice dinner by David Hedley of Hedley's Books fame. I was dying for a glass of wine at that point, it has to be said. We had never met before but had plenty of bookish stuff to talk about over a good local Pinot Noir.

On Thursday I visited three schools in Masterton: Masterton Intermediate, Solway College and Hadlow School. All were fantastic audiences, and I was ably looked after by Penny from Featherston library who tirelessly drove me around.

That's it for now! I made it back to Christchurch on Friday evening. More soon...

Posted by Rachael King at 7:48 pm No comments: 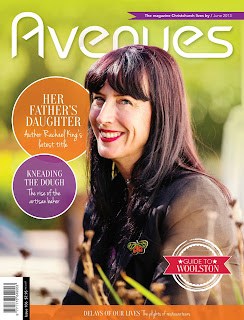 Avenues, a Christchurch magazine, has very admirably put a writer on their cover - me! I'm very happy with the story, which is one of the more in-depth interviews I've done in my career. It covers all of my books and a bit of my family and personal history, as well as a peek at my taxidermy and weird ephemera collection. And happily, it is available online, right here: Avenues.
Posted by Rachael King at 6:26 pm 2 comments: