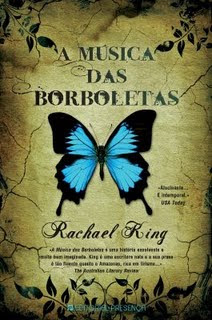 I noticed this morning that my blog and website have had a sudden influx of visitors from Portugal, which alerted me to the fact that A Música das Borboletas, the Portuguese translation of The Sound of Butterflies, must be out! It's a lovely cover, I think. I'm intrigued to see what will happen to the translation in the places where, in the English language version, I wrote some dialogue in Portuguese. I guess some copies will inevitably find their way to Brazil, and I wonder what the reaction to the book will be there (I did give it to a couple of genuine Brazilians to read before it was published).
Posted by Rachael King at 1:53 pm 4 comments:

Labels: The Sound of Butterflies, Translation

Congratulations to all the winners at the Montana Book Awards last night. My favourite for the fiction medal came out on top - Emily Perkins' Novel About My Wife - but as I have confessed elsewhere, it is the only one I have actually read, so I am a little biased. It is such a well crafted novel and a gripping story - the two things that, when combined, make me love a book. All too often the two seem to be mutually exclusive.
This is the last year that Montana wines will be sponsoring the awards, and next year, with NZ Post on board, the awards are getting an overhaul. For the better I hope! My only suggestions for improving them are as follows:
1. Please get rid of the runners-up for the fiction award. This is a literary award, not Miss World. I don't really see the point, other than making the two authors who didn't get a place feel stink.
2. Open up the Readers' Choice award to all NZ books published that year, not just the ones on the shortlist. I think the winner this year was very apt (Kate DeGoldi's The 10 PM Question), as it has clearly been a popular book, but other years I think it's been a bit mean-spirited, and some good books that have reached many readers have missed out because they are not 'literary' enough. I'm thinking of authors like Jenny Pattrick and perhaps some genre fiction writers - this is their one chance to get recognised as we don't have separate genre awards as they do in other countries. I think it's fine to leave those books out of the finalists for a literary award, but open them up for the Readers' Choice award and let them compete with the literary heavyweights. Go on.
My two cents.
Posted by Rachael King at 4:11 pm 3 comments:

It was my birthday the other day and I was given two books I have had my eye on: Relief by Anna Taylor and As the Earth Turns Silver by Alison Wong. The next book on my pile is The Rehearsal by Eleanor Catton, so a varied and sumptuous feast of debut New Zealand fiction awaits! (Just a quick aside: I just love the covers of Wong's and Catton's books: both designed by the very talented Keely O'Shannessy.)
As Bookman Beattie pointed out a while ago, there are a lot of new books being published in NZ this year, all of which seem to be by women (and I know for a fact there are a few more to come before the year is up). It seems the NZ lit scene is alive and well and is turning out new faces all the time.
But where are all the blokes?
Posted by Rachael King at 7:49 pm 5 comments:

This is nothing whatsoever to do with writing, but does take in some of my other interests - namely, vintage style, parties and general silliness. I think now would be a good time to be young and carefree in London with this kind of event going on (when I lived there it was all raves - blah). I'm keen to check out this Chap magazine as well... just the thing for the chaps in my life.
Thanks to Fleur de Guerre for her wonderful blog, Diary of a Vintage Girl, to make me envious.
Posted by Rachael King at 5:42 pm 5 comments:

The incredible growing and shrinking novel.

I have finished my novel and sent it off to publisher and agent.
Hooray!
Some time ago I asked readers of this blog whether they are a taker-outer or a putter-inner. I have recently proved to myself what I already knew - I am definitely a putter-inner. When I finished the first draft of Magpie Hall, it was 74,300 words long. When I finished the second draft, it was considerably longer. I am not someone who throws everything at the page and then has to cut it back, like topiary, to find its form. Instead I throw down what I need, then go back and expand things.

Now it seems that I am both a putter-inner and a taker-outer. My final draft, even though I added a couple of scenes, is now shorter than my second draft. Turns out there was a lot of fat to trim.

I also posted once about the perfect novel that I had in my head. I don't know if what I have written is quite what I had imagined I would, but that is not surprising really -- things get lost in translation from brain to page, and we are limited by our own abilities.

My friend and fellow writer-blogger Marianne drew my attention to this fabulous article by Ann Patchett. It was written years go, and I'm astounded that I've never seen it before. Go and read it: it's funny and apt for anyone working on their first, second or tenth novel. As if in direct response to my 'perfect novel' post, Patchett has this to say:
"Somewhere around Page 80 I will accept that I am neither smart enough nor talented enough to put all the light and movement and beauty I had hoped for onto paper, and so I will have to settle for what I am capable of pulling off."
With my finished novel I have settled for what I am capable of pulling off, but I hope that it is better than that sounds! Check out what she says about wanting to plagiarise your own novels...
Posted by Rachael King at 12:23 am 10 comments:

It's all coming to a head now.

Madness. My novel is just about finished. Just a final polish and then off it goes to various publishers and agent, three weeks ahead of deadline. Which is just as well, because it will need to go through the editing process and I need the extra time up my sleeve. From August 23 I will be a little indisposed with a new family member.

Four months ago the deadline was looking impossible: I written had 40,000 and those words had taken me a year to write. The more I wrote, the longer the book wanted to be. I was feeling sick and tired all the time. But then something happened. It all started falling into place. Suddenly that life growing inside me wasn't being such a burden. I had spent so much time thinking about the book that suddenly my writing sped up and what was going onto the screen was no longer about finding the voice and the story of the novel: I already had those. So when the words eventually fell on the page they were mostly the right ones. I have been describing it as the novel reaching a critical mass in my head. It was bursting out of me.
Writing a novel is a little like having children. It gets easier as it goes along, so much so that when it is going really well, you forget how hard it was in the beginning, and you do it all over again. This book was agony to write at times - last year I had some dark days, weeks even, when I couldn't imagine ever finishing it or getting it right. But all that is behind me now.
Just a quick mention: last weekend I went to Wellington to visit family and friends, and was very privileged to witness the gloriousness of The Wellington International Ukulele Orchestra at the Michael Fowler Centre, on the first of two sold-out shows in one night. The sound was superb, as was the set and it truly was, as they advertised it, a magical evening. Those harmonies! Those lead breaks! As their friend, I was pleased and proud. As a fan, I was just so happy to be there. This is a show that deserves to play at similar venues all around the world in my opinion.
I will leave you with a picture of the ukes at one of their first ever gigs: my wedding, in 2006. They played 'All You Need is Love' as we signed the register and the wedding ditty as we walked down a makeshift outdoor 'aisle' on an unusually glorious Wellington day in February. Don't I feel smug.