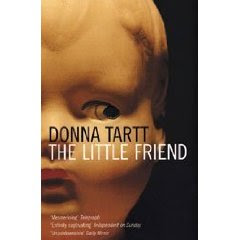 I can see now why some writers take ten years to write their second books. I’m thinking of people like Donna Tartt and Junot Diaz. Second books are hard. Well, technically speaking it’s not my second book I’m working on; it's my third, although as a follow up to my first published novel, I will call it my second.

It’s not that I’m paralysed by anxiety. If I go looking for the anxiety, I can find it easily enough, and find plenty of things to feed it – will this one be better than the last? Will my publishers like it or reject it? Will I be able to finish it before my residency (and salary) runs out? – but I’m not feeling that anxious, honestly. I’m just looking from the outside in for a moment, cool and detached, at the process I am going through with this one, and it has made me think of Donna Tartt writing The Little Friend. Of course she had extra pressure – how to follow up a mega-hit – that thankfully I’m not burdened with. I’m just really interested in the way this novel keeps slipping out my grasp, like soap in the shower. Just when I think I’ve got it, it twists away again. One moment I think I know exactly what it is, and the next it morphs and changes and I realise that what I have written so far is no more than a bit of dabbling to get me ready for writing the novel properly.

I imagine Donna Tartt starting The Little Friend with an idea: little girl’s brother gets murdered; little girl is kind of quirky, with a quirky Southern family; quirky little girl sets out to find her brother’s killer. I bet she doesn’t even know until she gets to the end that Harriet isn’t going to find the killer. Tartt probably thinks the whole time she is writing, ‘Well I don’t know who did it, but I’m sure if I keep writing it will all become clear.’ Except it doesn’t. So she keeps writing. And as she writes, the book changes – she needs to introduce a strange misfit family into it as suspects and she becomes enamoured of them and wants to give them a point of view. She starts to love writing their dialect. For a while, she follows them to see where they will take her.

She finishes a draft and goes back and changes lots of things. She rewrites passages so they sing, so she can really feel under the skin of the character, view everything through their eyes and write the world accordingly.

In the meantime, some years have gone by. She still doesn’t know who the killer is. She changes some more things, rewrites some more. Another few years goes by. And so on. She knows this whole time that it has to be better than it is, that if she just keeps working away at it, it will get better and better until it is finally worthy of releasing into the world.*

I understand now. I just hope and pray that I can condense that process into a much shorter time.


*Warning: may not actually be how Donna Tartt wrote The Little Friend. In other words, don’t quote me.
Posted by Rachael King at 8:11 pm

I read this post today on the bus ( via my phone) - while I was thinking about how best to edit, follow the spark and keep going. Thanks Rachael, seredipitous

I'm impressed by your technical nouse! Was it serendipitous as it scared you into carrying on lest 10 years drift by?

me too, if only I could make a comment on there, gee that bus ride would go faster....

Serendipitous as in reassurance, ie letting the work take me where I need to go.

Also, trying to find my editing process. Usually when 'finished' a writing project there is a hiatus, but this time, I am rolling on - just trying to find my new rhythm....I am methodical by nature. I just think once I find the rhythm then the rest takes care of itself ( thinking of lashing out on one of those super small laptops to be mobile maybe, but will still write in the raw...(by hand)

Rachael, I hope you get to grips with that bar of soap! You describe Donna Tartt's struggle so well, I'm sure it must have been like that.

By the way, I forgot to say in my last post, my wife - a Rachel rather than a Rachael - took Sound of Butterflies on holiday with her and loved it. She was well and truly rivetted. Hope this doesn't make writing the next one any harder!

For God's sake woman, I'm onto my fifth and you'd think by now I'd pretty much have the technique down to a T but oh no... This is by far the hardest thing I have ever worked on and I've been at it for three years and I still can't get over the hump in the middle. (I had a similar problem with the third and I had to leave it for two years and go off and write a pile of short stories). The second and the fourth went by the numbers if that's any consolation.

Roger - always good to hear. Thanks.

Jim - I guess you've just highlighted the fact that books are like children: they can come from the same parent, and have completely different personalities.

Too late - have already written an in-depth study of Donna Tartt based on this post, which is being published today in an international syndicate of newspapers. Expect a lawsuit.

I think the comparison of a book to a child in your last comment is a good one - they're all different, and provide entirely different experiences. And some take years and years to write and become the book equivalent of surly teenagers.

Good one, so 521 words into my first novel, after three months, and no particular reason to hope as far as publishing goes, struggling over every word, because that badly chosen word, or that, will deny me the Booker (aiming high :) )and it doesn't get any better.

Still, at least I've got plenty of time to save the coins for your next novel :)

Mark, now is NOT the time to be agonising over every Booker-worthy word! Go to it man and get that shitty first draft down, or at least underway!

This book is still sitting unread on my shelf even though I bought it pretty much on publication day. Partly this is because I loved 'Secret History' so much I didn't want to be disappointed and so kept putting it off and partly it's because friends did read it straight away and were confused by it for some of the very reasons you pinpoint. I think after reading your post I may take it down now and read it from a different point of view. Thanks for the writer's insight.

I think I really liked it at the time but didn't love it - I saw a few flaws in it. But it also had flashes of brilliance, and the fact that I remember so much about it all these years later obviously (to me) means it made an impact.