I was going to call this post 'Foreign Cities' and say how appropriate it was that when I go to Melbourne this week my book of choice is called Foreign Cities. But it's not; it's Forbidden Cities by Paula Morris (see Bookman Beattie's recent interview with Paula here). I was getting it mixed up (again - sorry Paula!) with Charlotte Grimshaw's novel Foreign City.
So. I am going to Melbourne this week to visit friends and have a small holiday, and I shall be taking Paula's new book of short stories, which I'm very much looking forward to reading. Even though I'll be in a foreign city with much to do, I will also be in a nice quiet hotel with all the time in the world, and if there's one thing that I don't get much of these days, it's lolling around reading.
I love Melbourne. I've only been once before but if I was going to move to Australia I wouldn't have much trouble settling there I think. It certainly isn't what I would class as a forbidden city; at least, nobody has forbidden me to go there. It might be forbidden in as much as I'm a bit worried about shopping temptations and perhaps drinking too much with my lovely friends. Ah, the decadence!
The Melbourne Arts festival is on and I'm going to see Goran Bregovic's Tales and Songs for Weddings and Funerals on Saturday night. Bregovic made the music for Emir Kusterica's films Time of the Gypsies and Underground, both films I loved, with the music contributing significantly to that love. Here's the blurb:
"The maestro of this timeless new sound, Goran Bregovic, melds a 37-piece ensemble from the best of the Balkans: a 15-piece all-male choir; a 12-piece string orchestra, a six-piece brass 'Wedding and Funeral' band; two female singers from Bulgaria; a guest vocalist Alen Ademovic and, of course, Goran Bregovic! The result is a recipe for riotous fun, passionate performance and exhilarating energy – featuring Bregovic’s much-loved film scores, hot-wired revivals of traditional tunes and new fusions of flavours from Gypsy to rock."
I can't wait. Perhaps afterwards I'll try and give another stumbling music review, where I try and put into words things that I only feel with my gut.
I'm also going to see if I can't get a bit of dancing in, since Melbourne supposedly has one of the most vibrant swing dancing scenes in the world. And speaking of early-20th-century-dance-styles, Melbourne is also home to one of my literary guilty pleasures: Phryne Fisher, the can-do 1920s flapper detective gal, the creation of Kerry Greenwood. If you want maximum escapism with fabulous frocks and mint juleps, you need look no further than Phryne. 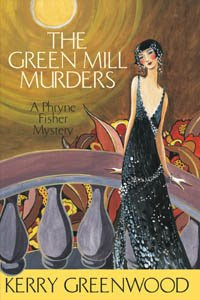 If you find yourself in Sydney, look me up!
I have to say that Sydney is more than beach babes and harbour, equally beautiful or more so, than Melbourne....

I love Kerry Greenwood's books! Have you read the Maisie Dobbs series by Jacqueline Winspear? Very similar. I have a couple, will give them to you when you get back (if you haven't read them. Not that you need another two books added to your TBR pile either. But anyway).

Have a great time! Wish I could hide in your suitcase (but not in a creepy way).

If if love Indian food, then you'll like that restaurant. Father and son, be nice to dad and you get a discount.

Phryne is the only literary character I believe I can claim to have introduced to you and Miss Parker. I'm proud of her, so hold no stock for your purported guilt.

Have a mint julep with Ms P for me. x

Phyrne sounds wonderful, and I'm busy watching Jeeves and Wooster so immersed in flapper stylings. Melbourne is my home away from Christchurch (I've got sisters who live there). Love love it. Koko Black does the best hot chocolates in Christendom. For clothes, I like Madame de Pompadour (by the Queen Vic Market) and Leghorn Rouge. Lots of good vintage places too especially in Brunswick. There's a good outlet store up there that has Alannah Hill etc. And shoe heaven!! Enjoy.
(by the way I'm Donna from Christchurch City Libraries and on the blogging panel with you at the Writers fest)

Have fun shopping and relaxing.

Ah! You're in my neck of the woods. I do hope you have such a lovely time. I've lived here for only 6 months but it is definitely home. I wish I could get to more at the Arts festival - but outside of work and blogging I really have to try and get some more fiction stuff written, edited etc.
I'm bummed to be missing out on Phillip Glass - but I did get tickets for Neil Young in January :-)
Can't wait to see what you say about Melbs,

Hi Rachael - fyi read an article in The Australian arts section Sat about the trials of writing biography, first 2 paragraphs talk about your Dad...hope you enjoying Melb

Thanks everyone for your comments - too knackered to reply right now but thanks for all the advice about what to do in Melbourne - I did get it!