On the Friday of Wordstock I was picked up by the lovely Donna and taken to Lincoln High to talk to a couple of classes in the school library. What a great bunch of kids. I was quite nervous beforehand, not because I was scared of them, but because I didn't really have anything prepared and hoped I wouldn't run out of things to say. Someone had made this wonderful sign for the event: 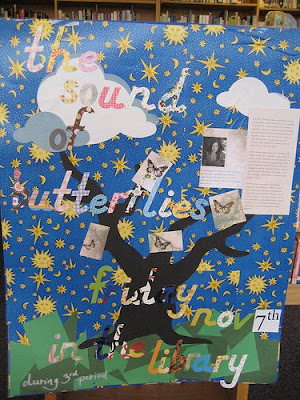 I had nothing to worry about. I ended up just chatting to them about life in New Zealand and about being a writer - they asked lots of really great questions and the time just flew by. I asked them what they knew about New Zealand, and most of them said 'Lord of the Rings' and 'Flight of the Conchords' so I was able to supply good anecdotes that arise from living in a small country where everyone knows each other.

Afterwards I played tourist and took photos of a real American high school! This might seem a bit pedestrian to any American readers out there, but imagine what it's like to grow up watching American teen TV dramas and you'll see what I mean. Schools there are so different from ours, and this one was just like the many I've seen on the small screen over the years. 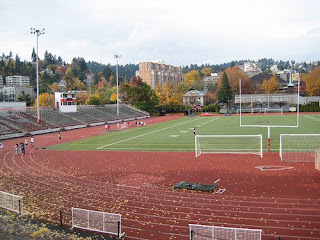 This photo also captures well the gorgeous autumn-ness of Portland. I also discovered that Elliot Smith* and Matt Groenig both went to Lincoln High so they impressed me right back. 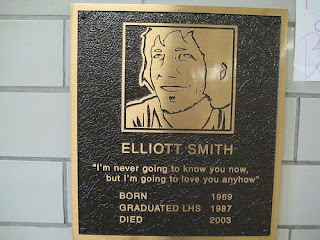 Thanks for having me, Lincoln!

*It has just occurred to me looking at this plaque that Elliot Smith would have been my exact contemporary at school. So very sad.
Posted by Rachael King at 7:21 pm

What an amazing poster! I don't suppose you nabbed it to bring home? Would be a great artwork for your study. :)

And I just read the review of SOB on LiteraryMinded - congratulations!

Love the new banner and greatly enjoying your reports from the US.I know how frustrating it can be when yu cannot get online so appreciate the trouble you have taken to keep those of us back home in the loop.
Travel well,
Ciao,