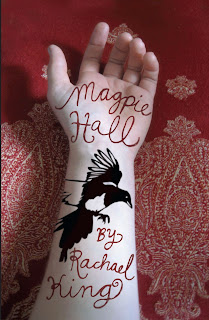 Only one month to go until my new novel, Magpie Hall, is published here in New Zealand. I am feeling rather excited and, of course, apprehensive as to how it will be received.
I read through two sets of proofs - admittedly the second not quite as thoroughly as the first given the timeline and my commitments at home - and fixed up a few typos and some potentially embarrassing factual errors. It is now at the printers, and advance reading copies (or ARCs) will be going out soon to booksellers and reviewers. I have already done one media interview which was a joy because the interviewer had actually read the book (not as common as you would think!), and it made me realise that I have plenty to talk about with novel so hopefully I won't be boring people by going over all the same ground as the last time I had a novel out.
In fact, there are quite a few things I would like to say about Magpie Hall on this here blog, but I think I might wait until the interviews are over, in case I get the chance to wax lyrical in those about why I chose Magpie Hall as the title, what led me to tattooing as a theme, how this novel was assembled in a completely different way from The Sound of Butterflies etc etc. Then I can write about whatever I wasn't asked. I hope that anyone who reads the novel and who also reads this blog will feel free to ask me questions about it as well.
In the meantime, I wait. It's like that final month of pregnancy where you're sick of being heavy with child and would just like to get it out now please, so you can meet it and see how it is in the world.
Speaking of which, the upside to spending hours on the couch feeding a baby has meant that I've caught up beautifully on my reading, as anyone who has been keeping an eye on my 'what I'm reading' section over there to the right will have noticed. I've just started Sarah Waters' The Little Stranger, which, like my book, is set in an old country house that has seen better days and may or may not contain a ghost. All I can say is thank goodness it came out after I'd written mine so I couldn't be influenced by it in the slightest. Now I just get to enjoy reading it.
Posted by Rachael King at 2:14 pm

Can't wait! And I'm so glad you encourage questions because I ask them all the time :)

I cannot read any other novels whilst I'm writing as the prose pollutes my own! Looking forward to making a start on the latest additions to my reading pile when I'm done writing my latest preject though - Magpie Hall included!

I can't wait and I'm sure I'll have lots of questions.

Glad to hear you can catch up on your reading Rachael, have noticed you are ploughing through the books.

You will have to let me know how to get a copy of Magpie Hall here in Oz...looking forward to breast feeding and reading too

Looking forward to reading it - and the interviews, of course. :)

you know your book will have a special spot at Rona Gallery in Eastbourne - everyone still remembers the lovely talk you gave when Sound of Butterflies was still fairly new...